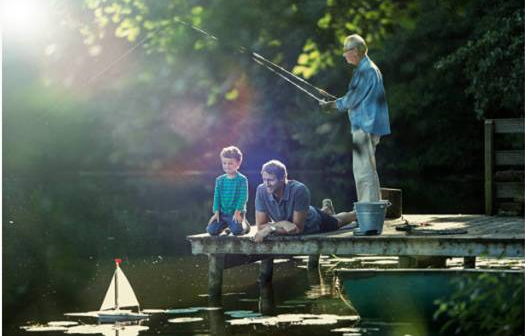 Justin is the youngest in his family. He’s a remarkable kid who came into the children’s program with a smile, rolled up his little sleeves, and worked intently throughout. This eight- year-old lives in a “looking-good family”, where trouble and stress lurk just beneath the surface.

On the third day, Justin stopped me with a very anxious look on his face. “Will you please come with me to my dad’s group this afternoon?” he nervously asked. As his eyes filled with tears he shared, “I don’t think I can do this without you.” I hugged him and let him know that I would be there every step of the way. We faced the daunting challenge of going into his dad’s group. Justin would get the chance to tell Dad about how addiction has been hurting the family. To complicate things further, all his family would be present, including his grandparents.

As we headed toward Dad’s group, Justin grabbed my hand and held it tightly. “You can do this,” I reassured him, yet he blurted out “I’m scared, Jerry.” I knelt down to be on eye level with him, but before I could offer words of encouragement, Justin explained, “I don’t want to hurt my dad and mom.”

“I don’t want you to do that, either,” I agreed. “Just tell the truth. Tell on addiction.” He got a wry smile on his face, nodded approvingly, and told me to hurry up. We sat on the floor outside the group room waiting to enter. Justin looked at me with a devilish grin. He put his finger in his mouth for about twenty seconds, took it out to dutifully inspect it, and then playfully stuck it in my ear. It was a classic Wet Willie. We both broke out in laughter. I marveled at how quickly Justin could go from serious to silly.

Justin did a masterful job of letting his dad know how much he loved him and how much he hated Dad’s alcoholism. The group was moved to tears during this eight-year-old’s courageous sharing. Most of the participants had also grown up in families hurt by addiction, so they could easily relate to and identify with Justin’s poignant words and gentle manner.

When I asked Justin if he had anything else to share, the tears finally started rolling down his cheeks and his bottom lip began to quiver. He looked right at his dad and declared, “Stop hurting my mom. You hurt her when you hit her and call her names.” Justin’s words rocked the group, but he still wasn’t done.

“You call me bad names, too, and I get scared of you, but I still love you.” With these final words Justin reached out and melted into his dad’s arms. It took an eight-year-old to bust the family secret: domestic violence. No one on the clinical staff had known anything about this. After the two of us left, that family group had lots to work on.

On the fifth and final day of the program, it was time for the forgiveness group. Justin and I were invited to attend. Soon after we arrived, Dad asked his son to join him in the middle of the circle. It took Dad several moments and a few deep breaths to compose himself before he could share with his little boy. “Son, will you forgive me for calling you names, not spending time with you, and hurting your mom?”

Justin immediately blurted out, “Yes, I forgive you but only on one condition.” I had prepared Justin for this process, but he was veering off course. “I forgive you only if you play with me twice a week.” The group erupted with laughter, and Dad promised to do just that.

Then Grandpa invited Justin’s dad out to the middle. Chills went down my spine when this seventy-one-year old man spoke to his son. “Will you forgive me for not spending more time with you, sometimes calling you awful names, and hurting your mom?” It was as if Dad and Grandpa had written up their forgiveness lists together. You could see and feel how the trauma, abuse, and addiction had been passed along to each generation.

Dad started to cry as he heard the words he had been longing to hear for so many years and finally responded, “Yes, Dad, I forgive you. I can’t carry all this old baggage and stay sober.” They embraced and just held each other.

Justin’s dad made his way back to the group circle, but Grandpa didn’t move. Finally, he put up his hands to cover his face and sobbed. After a few minutes I asked him what was going on. He looked up and softly replied, “I just forgave my dad.”

It was a child who led the way. Just for today, this family had embarked on a new journey, one where each member was changing their family legacy. As we honor Recovery Month, let’s celebrate the entire family in the healing process. When we welcome and include children and family members, the whole family, both individually and collectively, can find that path to help, hope, and healing.

Addiction runs in families…but so does recovery. Discover more about the importance of family recovery by visiting our Friends & Family section.

Jerry Moe is the National Director of the Hazelden/Betty Ford Center Children’s Programs.

Image above courtesy of Getty Images.